After all the uncertainty this year with the Covid 19 pandemic, no-one was sure if the Tour de France would happen this year.  As it turned out, it was cancelled until late August. However, the Tour de Fleece organisers decided that the Tour de Fleece would go ahead in July anyway!  And there's an added bonus this year because we're having a second one starting at the end of August!!  What fun!

This year I rooted through my stock of fleece sacks and found this very messy cria alpaca (baby alpaca's first shearing) which was given to me about 3 years ago by my friend who runs an animal park over here.  We were actually visiting on the day this little girl (her name is Liesje) was born, in fact we probably arrived less than half an hour afterwards, so it feels extra special to be spinning her fleece. 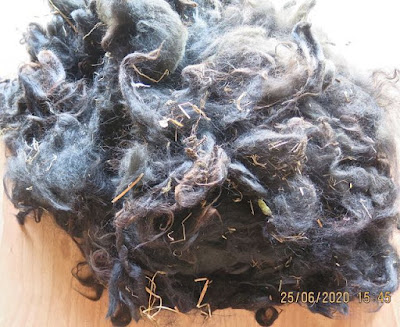 This fleece has quite a long staple and probably would have been difficult to card, but it was really all the straw that decided me to use my combs to prepare it.  I couldn't face sitting for hours picking all the vegetable matter out only to then have to card it.  Combs get rid of everything, so that was the way to go. 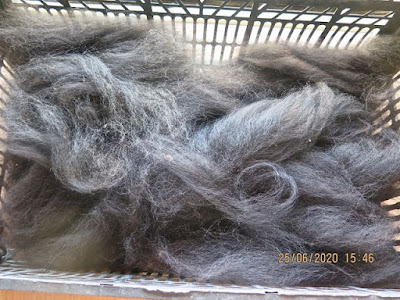 All ready for the big start up (note the extra large fan to keep me cool through all the hot weather we've been having lately) :- 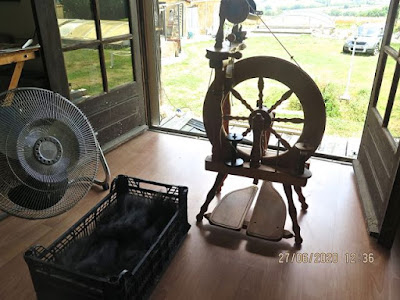 The finished bobbin has a lovely sheen and quite a nice halo.  I'm hoping to be able to use this on my weaving loom, but will need to spin more alpaca to go with it.  I'll probably use Liesje's Mum's fleece as she's black too. 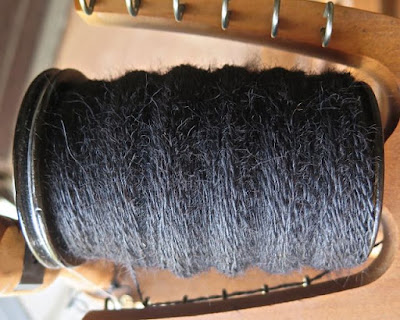 Next up, I unearthed an even older bag of merino fleece that had never even been opened.  I've prepared it by flick carding each end of the locks into lovely fluffy piles and then spinning from the cut end.  This is being spun "in the grease" as I don't really like to wash fleece before I start to prepare it.  I don't like the lock structure to be messed up, and however careful I am washing fleeces, the lock structure always seems to suffer.  This way, it's easy to separate the fleece into piles of individual locks and then flick. 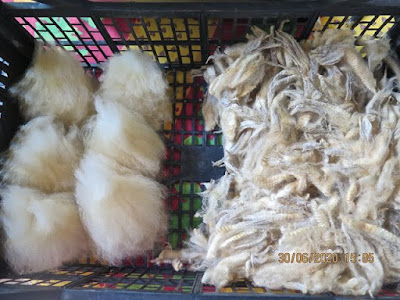 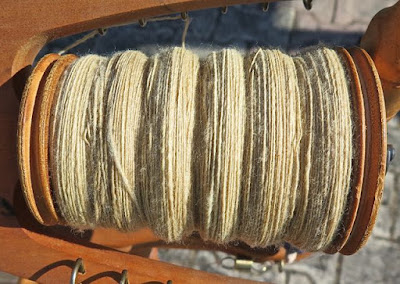 and was plied.  Here's the next bobbin being prepped. 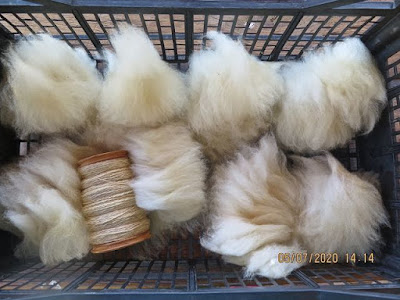 The second bobbin was finished and plied by the end of the second week.  Guess what's next? 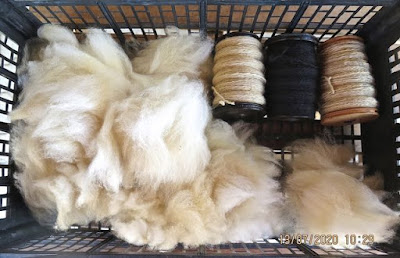 Last night (afternoon in the US) our TdF team had a Zoom meeting over a 4 hour period. It was really good to be able to meet up face to face.  There was one lady there who joined the DIY and Dye group in May 2013 (same as me) and I'd never ever even seen a photograph of her.  So it was lovely to be able to meet her "in person".  We have new people joining each year too, so it was good to be able to put faces to names.  We all sat spinning, carding, combing and generally chatting and I got quite a pile of fleece flicked ready for my third bobbin.

So, next week is the final week of the first 2020 Tour de Fleece.  I'm planning to spin this third bobbin of merino and then dye it all using the copious amounts of yellow onion skins I've been saving.  I really want to knit a cardigan with this yarn and I realise I won't have enough with just three skeins, but I'll spin the rest after TdF and then dye it to, hopefully, complement these three.  Maybe I could do various colours and knit a Fairisle pattern.

I'll be back next week with the finished yarn skeined and ready to use.