As usual in our Ravelry TdF team (DIY and Dye), we have prizes.  Lots of prizes!!  But they have to come from somewhere, so quite a few team members donate prizes each year.  I probably don't donate one every year, but this time I wanted to send something. The easiest and most pleasant (to make at any rate!) for me is an art batt.

So I gathered together lots of goodies and assembled three piles like this one : 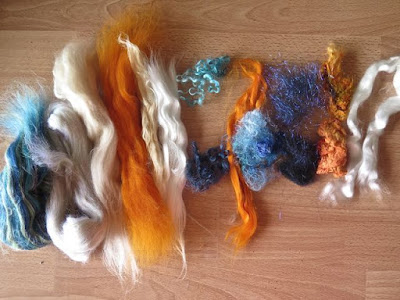 From the left we have merino/tussah silk, merino/trilobal nylon, 2 unknown - these were World of Wool pouches of luck I think they're called, soy silk, white bamboo, Gotland curls in 2 shades of blue, orange bamboo, throwsters silk, 2 colours of glitz, silk noil and tencel. Not pictured, but included after I took the photo : pale blue raw silk and grey feathers!!

I hand painted the fibres onto my drum carder (which means they were applied direct to the large drum and didn't go through the small one), starting on the left with the blue and working along to the right.  After one pass through the carders it looked like this : 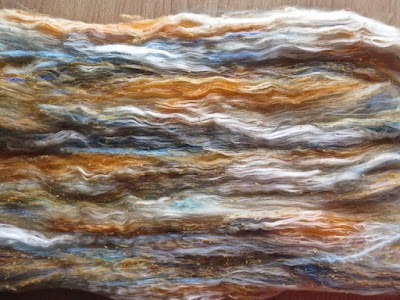 It was still a bit lumpy and bumpy at this point so I took it off, split it in two, and fed both halves back onto the drum.  Here's how it looked afterwards, and I was much happier with the condition of the batt.  The colours are more muted as they've blended together more, but I'm OK with that.  The colours are still there, and will (hopefully) come out in the spinning. 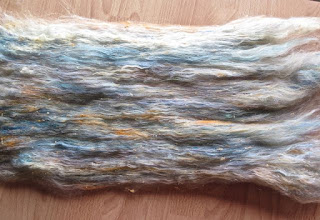 When I'd finished the third batt they were laid one on top of the other and rolled up.  Just added a ribbon and it was ready to go.  I think there's about 185g here. 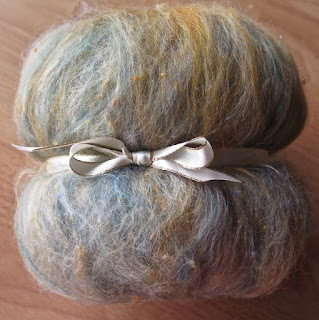 The "spotty" bits on the next photo were the bits of silk noil and there seemed to be quite a lot of them.  I was a bit worried there would be far too many and that the batt wouldn't spin as smoothly as I'd like, but there was only one way to find out. 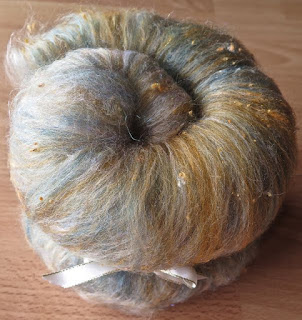 I had a small amount of all these fibres left, so I made another, smaller batt (it was about 55g I think). I normally don't get to test my batts like this because the whole lot usually gets sent, so having some fibres left gave me an ideal opportunity to do a test run. 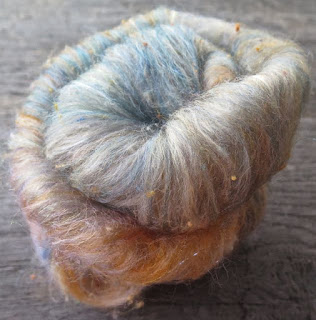 I separated the batt into strips and spun from one end, just letting the fibres dictate how it was spun.  If there was a lumpy bit, it went into the yarn, the silk noils all followed and it was actually very nice to spin.  I don't know what I'd have done if it had been awful!!  I don't think I could've sent it out as a prize could I?

Because there was only a small amount of this I really didn't want to spin it back on itself to make a 2-ply yarn, and I still had quite a bit of the blue merino/tussah silk left, so decided to use that as a second ply. 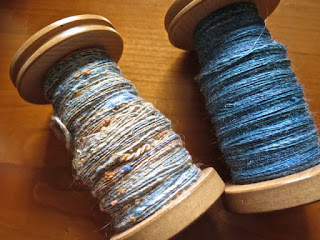 Finally, here's the finished skein.  In the middle there you can just make out one of the feathers.  They spun in pretty well - I do love feathers!!  I think these came from one of our walks and I found them in the grass.  It looked like a cat had demolished a bird and left a little pile of feathers scattered on the ground.  At least I feel it hasn't died totally in vain!  By the way, it wasn't my cat who committed the crime - it was too far from home! 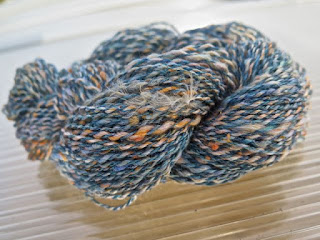 The prize batt has now been sent off to the U.S. to a happy recipient.  I just hope she finds it as easy to spin as I did!

goldilox
Life moves on so quickly in the slow-lane of Gascony France, here we are still since 2003 with the house finally as renovated as it's going to be after a life-changing event which now precludes heavy building work. We've decided to give this retirement thing a proper go at last and intend to fill our days all the things other people our age do. There are markets to visit, vineyards and country lanes to tramp, camper van trips to take, plus all the music with band practices and performances. Oh and let's not forget my spinning room which is crammed full of luscious goodies which should keep me happy for another lifetime and a half. We also plan on spending more time with friends sitting in the sunshine around a bottle or two of good local wine. Why not?